It’s such an abundant time of year, although we’ve been a bit behind in the growing season, a due to the wet conditions we’ve had. Some ripe blackberries were on offer the hedging that runs along the fence towards the gate to the Garden- a lot more are ripening so we appreciated the sample of delicious fruit to come. 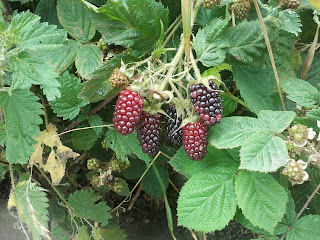 WILDFLOWER PATCH
Dave’s wildflower patch was planted back in April, from good value wildflowers seed mix bought in Aldi (a good tip from Dave - a good place to buy wildflower seed mix at a low price). The area was sown with a combination of a wildflower mix &  a bee friendly mix- with the emphasis on attracting beneficial bees  & insects.

The mix worked really well, amongst the more common species you would expect to find in the mix, such as poppies & cornflower, Dave highlighted the few more unexpected/under-rated varieties which are very good to have in  a wildflower patch, such as sow thistle (which we recently learned is edible as salad). We sampled the leaves & flowers which have a similar taste to dandelion leaves. Yellow campion & marigolds were also thriving in the patch.

BEES
We noticed a few hoverflies in and amongst the wild flowers- perfect insects to attract as the larvae eat aphids & other pests, & the flies themselves pollinate flowers & plants as they feed on nectar & pollen. Dave commented how concerned he was about the low number of bees in the Garden this year- a reflection on a world-wide issue of dwindling bee population, another plot holder had noticed this too. The lavender bush is usually buzzing. 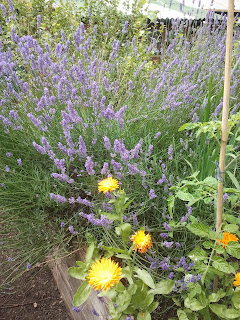 Perhaps it is due to the wet weather pattern this summer? Although in previous wet summers the bees have still thrived, especially on the lavender bush. This is a worrying fact. Luckily we did spot a few bees around the Garden, we must ALL keep encouraging them!
Behind the wildflower border the hawthorn, blackthorn & rose whips we planted along the picket fence earlier this spring were looking well, although it will take another 3 years before they will big enough to act as  a ‘security hedge’.
In the meantime, some large patches of nettles growing up to the fence provide some barrier, although somebody had recently damaged the fence in a break-in, which Dave has now mended.
Across from the fence and the path, a field lies before Leek Road. We learned that this will soon be turned into a car park for Staffordshire University. Although I am aware that the current parking available is not sufficient for the students & staff, initially I didn’t like the sound of this fact. However, Dave mentioned that this could increase security for the site. I hope that more people will notice the allotment site (and how beautiful the site and surrounding area is!) when parking their cars and walking towards the University. Perhaps this  will help promote the site to more students and staff.

PLANTING AUTUMN CARROTS IN RAISED BEDS
There’s still time to plant carrots, to be harvested in January. Ben & I sowed ‘Autumn King 2’ Variety. Dave advised mixing sand into the soil in the raised bed, to open up the soil structure to provide a looser soil that the carrots can easily push their roots through.
Ben mixed sand into the bed using a fork & we held a bit of the mix back in a bucket to cover over the broadcast seed.
We planted the seed by broadcasting (scattering the seed, rather than planting in rows) evenly spaced &  then covered with ¾ inch of the remaining soil & sand mix. Rain clouds were looming, so we didn’t water the seed in, as we usually would. Ben commented on how it is good to grow carrots in raised beds, about 2ft deep, as carrot flies cannot fly above this height, so hopefully the crop won’t be affected by carrot fly.

The Lemon Balm, Mint & Sage plants are in abundance, & getting a bit out of control. Between these & the potato plants the path has been consumed.

I cut some of the herbs for drying at home as I frequently use these herbs to make my ‘backyard brew’ herbal tea blend- as these are the 3 herbs I have growing together in planters in my yard, & they taste great together. It was great to see these plants growing so well together on the site. To dry them to make herbal tea with in the winter, when the fresh leaves aren’t available, I simply hang tied bunches of the cut stems upside down in a dark but well-ventilated area (my pantry area has a curtain over it to keep out light, or hanging them to dry in an airing cupboard or a spare room with the curtains closed does the trick). When the leaves crumble when crushed you can bag the herbs up in paper bags or jars for later use.


POLYTUNNEL PICKINGS
We harvested a few radishes which were enjoyed grated in a salad, along with a courgette from the poly tunnel which had been missed by others & had grown into a marrow.
This was eaten for Sunday lunch- cut it in half length ways, roasted in the oven. When roasted some of the flesh & seeds were removed & then stuffed with chard, mashed potato & a sprinkle of grated cheese, put back in the oven until golden, and eaten with a Sunday roast. Much appreciated fodder after an afternoon working in the Garden.
Posted by Kate lynch at 17:48 1 comment:

There is plenty happening in Spring at the garden in terms of ground preparation and planting, but perhaps surprisingly it is far from a time of plenty, aside from salad leaves and a few leeks. The same cannot be said of the present, however! All of a sudden there appears to be lots to be had, with cabbages, courgettes, cucumbers, broad beans, chard, onions and garlic all ready, and that's not to mention the fruit: an abundance of black and red currents, strawberries and raspberries. The glut of fruit and veg almost happens too quickly for us to keep up with!


In common with the experiences of other gardeners, not all things have been a success so far this year, however. The runner beans got off to an uncertain start: the ones that Ben and I sowed outside a few weeks ago have not been a great success as in some cases they were dug up before they had chance to germinate and in other cases the shoots were eaten off after they did so. I'm not sure who the culprits were! Not to be beaten, Anne planted some more in trays of six on 22nd June; varieties are Moonlight, Royal Standard, St George and Celebration. They have grown into healthy looking specimens in the polytunnel and the time has come to plant them out.

The borlotti beans we planted around a wigwam made out of bamboo canes a few weeks ago have turned out to be a bush variety, and so will not climb up the poles. This has left them available for some runner beans to climb up instead! These were planted to the level of the surrounding soil alongside the borlotti bean plants. Another wigwam has been constructed elsewhere in the garden where there was a bit of space in order to support some more runner bean plants. Construction of the wigwam involves pushing 12 long bamboo canes arranged in a circle about a foot apart into the ground, with a 13th pole placed in the centre. Each of the outside canes is pushed in at an angle so the cane is pointing out of the circle. When the canes are all gathered together with the one in the centre and tied together with a cable tie, the bow created in each increases the tension in the poles and the stability of the overall structure. These canes now support 13 healthy plants and all being well we should eventually have plenty of runner beans.


On 5th June Anne and I planted sweetcorn seeds into three trays of six each. Sweetcorn seeds look a bit like unpopped popcorn. The trays were placed on the racks in the polytunnel and were checked for progress intermittently. This gave me the not-at-all-childish idea of a competition to see whose trays produced the most plants, particularly as my trays appeared to be winning at the time. The final scores were Anne 6, Tom 9, but the result was not to be clear cut. Anne had planted two trays of ovation and one of sundance, whilst mine were two trays of incredible and one of sundance. Six of Anne's sundance seeds germinated and only three of mine did. As we had planted different varieties the result was declared a draw! Our plants have been planted out in a bed in separate rows so that we can clearly see whose plants produce the most cobs. I resisted the temptation not to water Anne's plants in.....

It is amazing how quickly the tomato plants grow as soon as they are planted in the beds in the polytunnel and greenhouse. One seemingly never ending job is taking the side shoots off the plants so that they put more of their energy into producing fruit. Dave had a hot day of it doing just this.

Meanwhile, the battle against bindweed continues....
Posted by Unknown at 16:38 No comments:

What better way to begin this blog than with the shallot, perhaps an underrated vegetable. Shallots are tasty and versatile (great roasted or in stews), and beautiful to look at when freshly peeled, ranging from near white, through green and yellow to red-purple in colour.

At the allotment we spent Sunday lifting our shallots and preparing them for storage. Shallots grow in clumps and need to be separated after lifting. They are then prepared for drying by cutting off the leaves and the roots, and by then removing the outer layers to clean them. The outer layers can also be soggy so it is worth removing these damp layers to limit the chances of rot. The cleaned shallots can be laid out somewhere warm and dry, and where the air can circulate (we use the benches in our greenhouse), making sure that none are in contact with each other, again to limit the chances of rot spreading.

The numbers of shallots lifted seem to be never ending and preparing and cleaning them is a repetative but theraputic job. When peeled they're beautiful tactile objects, each one different in size, shape and colour. All being well, the shallots should last us for a few months and I can't wait to start using them....

Meanwhile, the battle against bindweed continues, and a lot of fun was had harvesting strawberries and eating thern with cream....

A couple of perhaps useful shallot links follow to finish with:

From Wikipedia - about the shallot